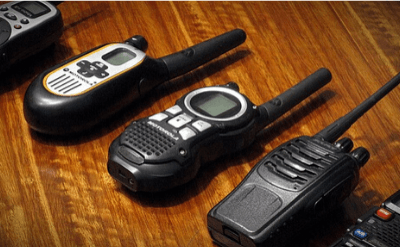 If you've ever played airsoft in a large field, you probably know that shouting back and forth to your teammates isn't a great way to communicate. Beyond the difficulty of figuring out what they're trying to say, the opposing team's probably hearing the same things you are – and will know exactly where your team members are at, too. If you plan on playing with a regular team or attending large mil-sim games, radio's a vital way to coordinate movements, relay information, and communicate tactics (and at some matches, radios may be required). At first, it may seem like radios are too complicated to set up, or too expensive to get for your entire team, but there are all kinds of radio options out there, and there's almost certainly a good option for you and your budget.

How Should You Pick A Radio?

Picking a radio is a lot like picking any other kind of gear- make sure you choose equipment that fits your budget, offers the right balance of capability, affordability and durability, and ensure it's compatible with the gear the rest of your team uses. However, there are a few factors about radios that make them challenging to shop for.

The easiest and most assuredly legal way to buy radios for your team is to pick up a pack of radios at the department store, preferably by a reputable brand. Unfortunately, many of these radios have a very limited set of features. It's up to you to decide what you need; generally, the more features you have on a radio, the more complicated it'll be to understand, and the more it'll cost. At one end, the department store radios have fewer channels and not many customization options, while complex digital mobile radios offer a highly adaptable feature set similar to military handheld radios.

Several features are especially important for airsoft use, not just in terms of radio capability, but also in terms of ergonomics and ease-of-use.

Generally, an airsoft radio ought to have some sort of plug for a push-to-talk device (PTT) that allows you to use a microphone and headset to communicate without having to speak directly into the radio. There are 30 or 40 different standards for a PTT microphone plug- Motorola, Kenwood, Hytera, Vertex, and others. Be sure to check compatibility before buying equipment; it can be confusing but saves money in the long run.

Additionally, since most radios use proprietary battery packs instead of common battery cells, make sure extras are available cheaply, in case they start failing or get shorted out in the field.

There are a number of other features that are nice- some radios can be programmed with custom channels or allow you to tweak some of their settings directly from the handheld unit.

In the United States, the Federal Communications Commission (FCC) regulates all broadcast media, including radio. As various forms of wireless communication become more and more popular, the demand for frequencies to transmit on becomes more and more severe; as a consequence, it's very important to note what is and is not legal to do. Keep in mind, I am not a lawyer or an expert in radio usage regulations. The following represents a layman's understanding of the complex subject that is US communications law and may not be entirely accurate.

The first thing to be aware of is that there is an enormous range of channel “bands” representing different collections of radio wave frequencies. Some of these are used for cell phones, some for television, some for wireless internet protocols, and a relatively small number are used for radio communication. In general, frequencies are divided into two regions: Very High Frequency (VHF), operating between 49 and 216 megahertz, and Ultra High Frequency (UHF), operating between 450-953 megahertz. Each of those categories is divided into a “low band” and a “high band”. Portions of these bands are used for all kinds of purposes, from assisted listening devices to RC car control.

Several sets of frequencies are worth noting, such as the Family Radio Service band, the General Mobile Radio Service band, and the Multiple Use Radio Service band. The Family Radio Service (FRS) band is a list of frequencies that any person can transmit on without a license, so long as they broadcast under a specified power limit with an approved device. Many department-store radios use the FRS band, and it's generally the band most airsofters utilize for gameday communication due to the lack of licensure and low cost of entry. General Mobile Radio Service (GMRS) band overlaps most of its channels with the FRS band, but allows higher broadcast power on those channels and requires a license to operate on. Lastly, the Multiple Use Radio Service (MURS) band is a lower-frequency band that allows higher-power radios to be operated without a license. For more information, plenty of frequency tables are available online; be sure to consult those, along with actual legal information, before transmitting on any frequency. 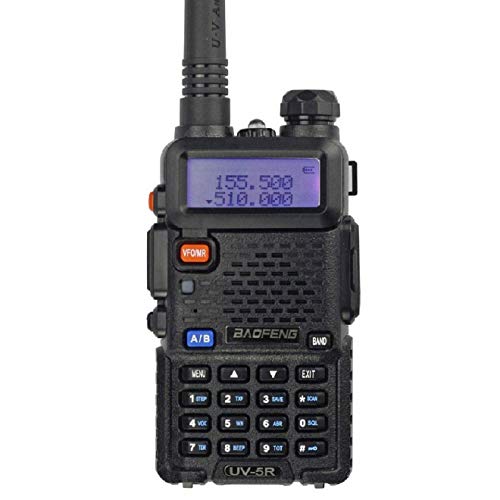 The Baofeng UV-5R is one of the most common beginners' radios out there. There's a tremendous amount of documentation available for the type, it can be programmed using a number of free software tools, allows the user access to its settings from the handset itself, and is incredibly inexpensive. What's more, it uses the common Kenwood 2-pin style connector for microphones or PTT units, making it relatively easy to find aftermarket headset equipment for the radio. Less important, though still interesting, the UV-5R has a reasonably strong LED “flashlight” and alarm mode. Like most consumer radios, the UV-5R also uses a technology called Continuous Tone-Coded Squelch System (CTCSS), in effect allowing multiple sets of users to use the same frequency without interference.

Unfortunately, as the radio has not been Part 95 certified by the FCC, the only way to use it legally is to obtain an amateur radio license. While it's a very common type at airsoft events due to its versatility and cost, and in its low power setting doesn't differ meaningfully from other common FRS/GMRS radios (meaning there's next to no chance of prosecution), most airsoft users are using the UV5R illegally on the FRS/GMRS bands. 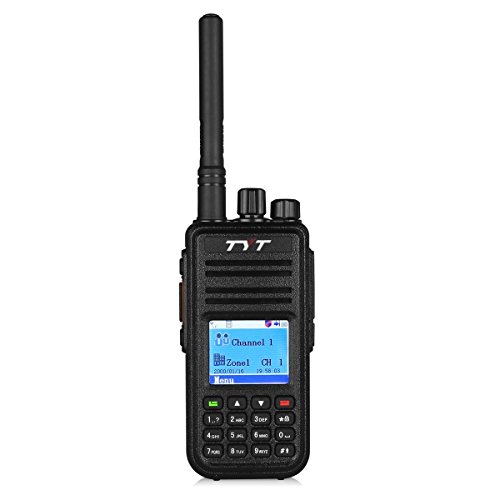 While I can't say too much about digital radio operations, the MD380 is frequently mentioned as one of the best digital radio options in an airsofter's budget. Digital radios transmit information in on-off pulses of a certain frequency instead of by varying the amplitude of said frequency, making them less prone to interference. On top of the technological improvement, the MD380 is pretty impressively programmable, offers encryption options, can take voice prompts, and has a relatively fast channel scan functionality. It also allows users to send text messages via radio. What's more, it also uses the Kenwood 2-pin connectors, definitely handy for tracking down compatible headsets and mikes. Unfortunately, like many of the other options in this list, the M380 requires licensure to operate legally. 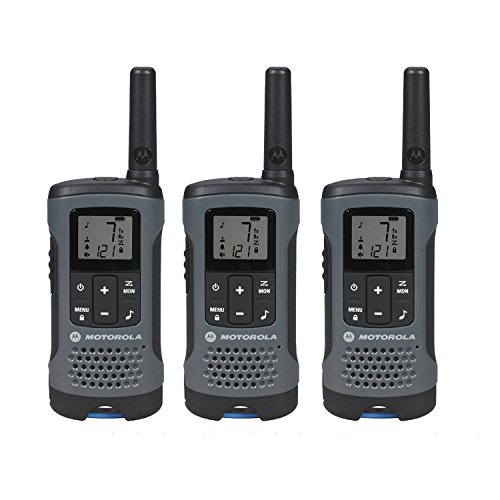 Unlike a number of the previous radios, the Motorola Talkabout is completely ready to use out of the box, no license required! That can be a huge time saver for airsoft users with little interest in taking a test just to talk over the air. While they don't have many of the features of the Baofeng offerings like programmable channels, they do offer 22 FRS/GMRS channels. Like most consumer radios, the Talkabout also uses a technology called Continuous Tone-Coded Squelch System (CTCSS), allowing multiple sets of users to use the same channel without interference, increasing the number of “effective channels” to well over two thousand. The Talkabout can also use either the included battery packs or standard AA batteries, which is pretty handy. Unfortunately, the Talkabout also uses M6-style connectors, which are less common for peripherals. 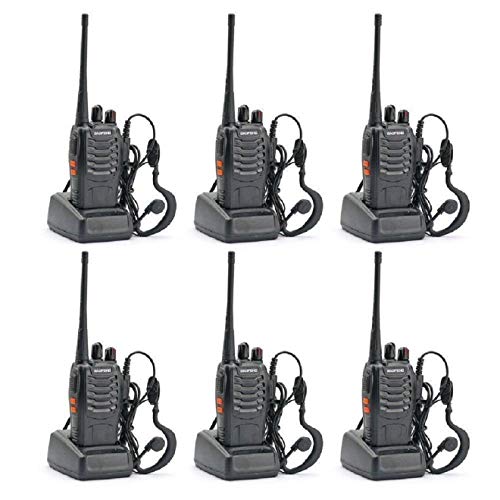 The Baofeng BF-888s are even more inexpensive than the UV-5R, and that's saying something. In this case, they come in a six-pack, which could be handy for equipping a full squad everywhere you play, possibly with a couple spares in case batteries get low. While they don't have the screen and keypad of the UV-5R, they can still be programmed via a computer and can hold up to 16 channels at a time. Also, like the UV-5R, they use the Kenwood 2-pin style connectors, making it really easy to find compatible audio equipment for your headset.

Unfortunately, as the radio has not been Part 95 certified by the FCC, the only way to use it legally is to obtain an amateur radio license. While its low power setting doesn't differ meaningfully from other common FRS/GMRS radios (meaning there's next to no chance of prosecution), it is indeed illegal to transmit on the FRS/GMRS frequencies with this radio type. Also, be very careful when you first get these; many users report the factory frequencies default to the same channels emergency responders frequently use.

Regardless of whether you're buying radios for just yourself or for a full team, or whether you plan to get an amateur radio license or not, there are good options available out there for effective gameday communication! Be sure to use your radio equipment legally and take good care of it, and it'll most likely take care of you out on the field.