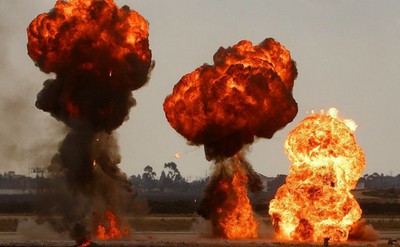 Do you want to add some additional realism and depth to your next airsoft game? Well, one of the of the best qualities of airsoft, compared to hobbies like paintball or laser tag, is that for nearly any piece of real-world weaponry out there, there’s also an airsoft equivalent. This is no less true when it comes to equipment like grenades, mines, and even mortars! Equipment like these adds new layers of strategy to airsoft, whether setting up ambushes in an outdoors environment or clearing rooms in a CQB game. In this article I’ll cover a few common types of airsoft ‘explosive’ and a couple of the more exotic varieties, explain how these airsoft grenades work and tell you how to use them. Keep in mind, that not every airsoft field will approve of the use of grenades/mines, so be sure to consult the local rules and/or referees before bringing them to a game.

The Tornado and Cyclone models of grenade are possibly the best-known models of airsoft grenade currently on the market. Produced by Airsoft Innovations, they’re reasonably budget-friendly and easy to use. Both function in similar ways; they need to be filled with BBs and green gas/propane, then they can be used by first removing the pin and spoon, similar to a real grenade, and then thrown. When they ‘detonate’, the high-pressure gas and BBs are released, which causes the device to spin and spray BBs in a 360-degree coverage.

The Tornado was the first of the two to be sent to market, and because of its milled aluminum core and plastic exterior cladding, it’s well known for its durability. It was sold in both ‘timer’ and ‘impact’ variants, the impact version detonating when it first struck the ground, the timer version detonating after a set period of around 1.5 or 3 seconds. Unfortunately, some airsofters have reported issues with the timers losing accuracy over time. Additionally, with the sales of the Cyclone series picking up, Tornado grenades are getting harder and harder to find online.

The Cyclone is the second, cheaper grenade sold by AI. Instead of an aluminum core, it was built with a polymer frame, which cut the price by more than half but also cost the grenade some of the indestructibility that characterized the Tornado models. Additionally, the Cyclone series is only sold in the impact variant, so if you want a cheap timer grenade, you’re out of luck. Still, they’re inexpensive enough you can buy three or four of them for less than even a low-end AEG, and they perform just fine for most situations! I’ve used one a couple of times and it’s worked well for me so far.

The Hakkotsu Thunder B is a simulation grenade marketed as a “flash-bang” for airsoft. Unlike the Airsoft Innovations grenades above, it doesn’t hold BBs- instead, it uses a replaceable plastic “shell” that fits over the grenade core. When the user pulls the firing pin, that opens the 12g CO2 cartridge inside the core, causing pressure to build up inside the shell. After the pressure has built up sufficiently (over several seconds) the shell will rupture, which should result in a very loud noise and some very startled airsoft players. Also unlike the Airsoft Innovations products, the shell is non-reusable and must be replaced after every use, while the firing pin must be replaced every several uses. Fortunately, since there are so few moving parts, it’s unlikely a Thunder B will ever break, and the consumable replacements are relatively inexpensive and widely available online.

An important side note is that the Thunder B should not be filled with liquid or BBs; the manufacturer specifically cautions against this because the pressure inside the grenade could be sufficient to cause injury. I have heard of airsoft players filling their Thunder Bs with baby powder or nontoxic, washable paint powder to serve as a marking device, but without some further safety testing, I wouldn’t even recommend that.

The most common 40mm grenade in airsoft is the “shower shell,” a metal cylinder sized to be fit inside a grenade launcher replica. Usually, they’re powered by green gas/propane but some models are designed for use with higher-pressure CO2. They generally hold between 30 and 180 BBs in multiple front-facing chambers, and when a button on the rear of the grenade is depressed, it releases the gas and launches the entire “shower” of BBs at speeds of up to 300 FPS. Shower shells are excellent for taking out large groups of tightly-packed enemies at medium range, but their utility is limited in other circumstances. At short range, the shower doesn’t disperse enough to hit multiple enemies, while at long range, the limited FPS and lack of hopup put the grenade user at a disadvantage compared to enemy riflemen.

Another type of BB-firing grenade shell is the plug shell. Where with a shower shell BBs are loaded into one of several integral barrels on the grenade, the plug shell has a larger hole on the front that BBs can simply be poured into. The hole is then sealed with a rubber plug to prevent any BBs from escaping before use. These shells are, obviously, easier to load by hand, and have a greater short-range spread than the shower type, but unfortunately, the rubber cap will almost always need to be replaced after use, as it tends to disappear into tall grasses or bushes upon launch.

The third type of shell is the foam launcher type. Instead of using gas to launch BBs, instead, they fire a small, soft projectile that’s usually either rocket-shaped or spherical. While this might not seem too useful in a game, many military simulation events mandate foam rounds as the only way to “take out” vehicles or other hardened targets. Additionally, some fields have rules that count a foam round landing within ten feet or so of a player as a hit.

The absolute cutting-edge of 40mm grenade shells, though, is the TAGINN system. The design is composed of two parts, the casing and the projectile. The casing is similar to other airsoft 40mm grenades in that it can be filled with CO2 or green gas/propane, but instead of firing BBs or foam balls, it had a rifled interior that allowed it to be loaded with and fire proprietary TAGINN projectiles. The main selling points were the improved accuracy due to the rifling and the ability to fire a wide variety of projectiles; currently, TAGINN makes 50-round BB launching shells, pyrotechnic smoke grenade rounds, blue chalk “marking” rounds and inert rounds (however, the smoke grenade rounds are currently not available for import into the US). Unfortunately, TAGINN rounds get really expensive, really quickly. Every casing costs in the neighborhood of $70, and the individual rounds cost upwards of $5 apiece.

That said, there is one big decision to make, and that’s whether you’ll use a standalone launcher or an underbarrel option. An underbarrel launcher like a Dboys M203-type or an S&T M320 can give you extra tactical options when attached to your primary, but it also adds a lot of weight around the front of the firearm, making it clumsier and harder to carry for long periods of time. A standalone launcher, like the ICS MGL, will generally be lighter than a rifle+launcher, but if you only carry a grenade launcher, you often lose the ability to fight at long range, and you’ll be limited by the number of 40mm rounds you can carry. In general, I view grenade launchers as a specialized kit and would advise that, if anything, you use a lightweight underbarrel launcher.

Ever wanted to lay an ambush? If the answer’s yes, there are a fair number of ways to do this in a game of airsoft, and some of the best ways involve the employment of concealed traps. Several companies produce ready-to-go mines and traps that can be easily hidden while waiting for your foes to pass through.

The Claymore mine is one of the iconic weapons of the Vietnam war- easily hidden, viciously deadly, and completely impersonal. Fortunately, in airsoft, it’s somewhat less lethal. Most airsoft claymore mines are sold for around $90, either as a remote-controlled package or with a laser tripwire to facilitate timely detonation. 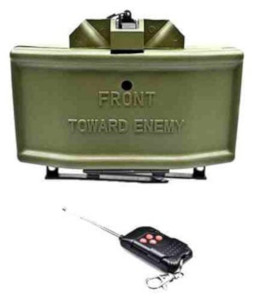 Most often, the power of the claymore comes from a spring-loaded slingshot mechanism, so to load it all you have to do is fold both spring wires back into the body of the mine and close the top cover until the latch snaps shut, then just pour BBs vertically into the front hole. When the mine’s triggered, either by tripwire or remote, the latch will spring open, the front face will pivot down, and the spring bars will snap out, throwing the 200+ BBs out at the target.

The claymore is easy to place: just stake it into the ground and you’re good to go. It also lends itself well to ambushes; if you know the path an enemy team might take, a properly placed claymore can eliminate a good portion of them with the first shot. If you’re lucky, the remainder will be confused and easy targets.

The other well-known type of airsoft trap is the pressure mine. Much like a real landmine, it has to be partially buried and is triggered when someone steps on it. Instead of exploding, though, the mine is loaded with paint powder, and the unfortunate airsofter’s weight usually opens a canister of high-pressure gas, propelling the powder upwards and coating the player.

Mines aren’t particularly effective airsoft gear due to the time and the entrenching equipment it takes to bury them, and the relatively high upfront cost, but in a game where there’s time to prepare for an attacking force, it’s often worth the drawbacks to see the enemy team’s response when one of their numbers gets blown up with a bright colored powder.

Remember the Hakkotsu Thunder B? Well, the same company’s responsible for (as far as I know) the only mass-produced mortar on the airsoft market. The Hakkotsu Mortar is composed of a mortar tube and a projectile with spring-opening fins. The projectile, loaded with a 12g CO2 cartridge, is dropped down the tube; when it hits the bottom, the CO2 cartridge is cracked open, which launches the projectile back out of the tube and to a range of about 200 feet maximum. The projectile doesn’t carry BBs, and I don’t know of a single field that would allow you to use the mortar in a game, but quite frankly? You don’t need practicality when you’ve got something as cool as an airsoft mortar. I’d totally buy one if I had the cash for it.

The airsoft ‘explosives’ market runs the gamut from gimmicks like the Hakkotsu mortar to reasonably practical tools like Airsoft Innovation’s line of grenades. Obviously, you wouldn’t want to go out on the airsoft field with just a couple of grenades in your pockets, but after you’ve got all the basic airsoft essentials like gear, a rifle, and goggles, I’d definitely recommend a couple of Cyclone grenades and maybe even an underbarrel 40mm launcher. Thank you for visiting iamairsoft.com! For great products and more information about the game, check out our Airsoft Buyers Guides and Airsoft U!