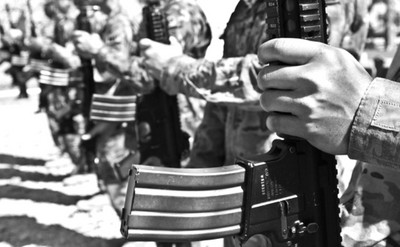 In an airsoft game, have you ever felt that you just weren’t carrying enough ammunition to last the round against your opponents? Or have you had the opposite problem, where airsoft felt too unrealistic because you could shoot hundreds of rounds without reloading? Or, has an airsoft rifle ever unexpectedly jammed on you? If any of these situations sound familiar, an easy, inexpensive solution is to look into other types of airsoft magazines. For $60-80, depending on the type of gun you own, you can usually grab a full combat load of ammunition for your next game. There is an enormous number of styles, types, and brands of airsoft magazine to cover, so in this article, I’ll try to explain the general categories, like hicap (high capacity), midcap, and lowcap magazines, gas magazines, and shotgun shells.

If you’re reading this article, you’re probably aware that by “magazine” I don’t mean Sports Illustrated. Just to be clear, though, “magazine” is the term for any device that can feed multiple successive rounds ammunition into a gun, whether by spring power, gravity, or some other force. (In popular culture, the words “magazine” and “clip” are often used interchangeably, but there is a difference. Unlike magazines, which directly feed cartridges into a firearm, a clip is a small sheet of bent metal that holds several rounds of ammunition, to make it easier to load a rifle with an integrated magazine.) As far as I’m aware, there’s no such thing as an “airsoft clip”, although some varieties of speedloader serve the same purpose that a clip would in a real firearm.

In my experience, high-capacity magazines are everywhere, the most common type of magazine you’ll find in airsoft. Usually, if you buy a new gun, it’ll include at least one hi-cap. Their name comes from their defining attribute- they hold a LOT of BBs. The actual capacity varies between styles of a magazine, but using an M4/M16 magazine as an example, most will hold between 400 and 500 6mm BBs. Having this much firepower at your disposal can be really, really handy, especially when you’re pinned down with no time to change magazines, but it comes at a cost.

Most of the space in a hi-cap is occupied by the BB reservoir, which as I mentioned before, allows you to hold an enormous amount of ammo. Gravity pulls the BBs to the bottom of the reservoir and funnels them into a place where they can be grabbed by a spring-powered turnstile, then pushed back up a tube and into the rifle’s hop-up unit to be fired. It’s an ingenious system, but there are a few disadvantages. First, since the magazine is powered by a spring (which is fairly similar to the springs in mechanical watches), it needs to be wound frequently via a small serrated dial at the bottom. Better magazines will need less frequent winding, but you should expect to have to take a break from shooting every ninety rounds or so to wind the spring back up to full.

Another disadvantage is that, since all the BBs are loose in their magazine, they’re pretty noisy… earning them the nicknames “maracas” or “battle rattles”. A final issue is that not every round will feed: since the turnstile’s down at the bottom, around thirty BBs will stay behind in the feeding tube. There is a solution to at least one of these problems… some manufacturers produce a type of magazine called the “flash mag”; instead of having a winding wheel at the bottom, they have a pull cord that’s pulled several times to wind the magazine. They’re marketed as being able to go through the entire magazine without rewinding. I haven’t gotten the chance to use one yet, but they’re pretty widely available if you want to do your own testing!

As far as these go, almost any reputable manufacturer will produce decent high-caps. Tokyo Marui is known for having the best springs, but G&G, King Arms, and G&P are all good as well. Even the Chinese manufacturers like Dboys, A&K, and especially CYMA have produced hi-caps that are great value for the money.

For someone who’s bothered by the idea of having to stop and wind each magazine, or who don’t want to sound like a mariachi band member when they’re running on the field, mid-caps are a nice compromise between capacity and realism. They’re a really simple system, far simpler than hi-caps: there are two parts, a tube that holds the BBs, and a long, thin spring fitted with a plastic nub, which pushes them all the way through the tube and up into the gun. Using the M4/M16 magazine as an example again, a mid-cap will hold between 90 and 120 rounds, more than a real rifle would, but substantially less than an equivalent high-capacity mag. For someone like me, who truly despises the idea of winding their magazines, but still wants to be able to be competitive against players with hi-caps, mid-caps are a perfect choice.

If you want lightweight magazines, the company MAG makes really great, reliable polymer magazines, which they sell individually or as a boxed set for a discount. I also like CYMA and G&P’s mid-caps- both have worked really well in my rifles. Just one word of warning- DO NOT buy Dboys or Lancer Tactical “PDW” magazines if you can avoid it. They were poorly designed and do not work reliably in any rifle I’ve owned.

Low-capacity magazines, also known as real-capacity magazines, are actually fairly rare in airsoft, and hard to find even online. They work the exact same way as mid-caps, they just hold fewer BBs in an attempt to better replicate the performance of real firearms. If you’re playing casual games of airsoft at your local field, I would heartily recommend against buying low-caps unless you’re prepared for a real challenge (or you’re using a DMR-style weapon). A better use for this type of magazine is at certain military simulation games or events, where the rules mandate the use of low-caps in order to put everyone on an equal, realistic playing field.

Honestly, though, as far as brands go, I haven’t had enough experience with low-caps to be able to recommend any manufacturers.

The idea of the motorized electric box/drum magazines has been gaining popularity in the airsoft world for several years, now that more affordable options have been entering the market. The mechanism is pretty much identical to that of a high-capacity magazine, but the reservoir is much larger, between 750 and 5000 BBs, and instead of having to wind the magazine manually, a small battery and motor are concealed inside the body of the magazine, triggered either by a sound sensor or by a manual switch. The hard part with electric magazines used to be finding one to fit your gun, but now manufacturers make drums that can fit nearly any popular style of rifle, from G3s to M4s to MP5s, and much larger box magazines that can fit most types of SAW or LMG. Out of those varieties, I’ve only ever used an A&K box magazine, (for an M249,) but I’ve been happy with it so far!

Gas airsoft magazines are similar to mid-caps, in that they’re spring-loaded and feed the BBs via a long tube. However, their capacity is limited by the fact that a large part of the magazine must be occupied by a tank for gas, whether that be green gas/propane, or CO2, and a valve to release it. This limits the capacity to around 15-20 rounds for pistols and 40 rounds for rifles, although manufacturer WE recently debuted a double M4 gas magazine that can hold up to 80 rounds. That gas is what’s used, not only to fire the gun, but also to cycle the action and load the next BB, making that part of the magazine incredibly important to maintain and keep lubricated.

An important fact to note with most gas magazines is that, due to the way gas pistols and rifles load, the magazine will have a pair of feed lips that extend above the top of the magazine to position the BBs. While this allows gas guns to use every round in the magazine, the feed lips are often a weak point in the design, and if handled roughly or dropped, the lips can crack or snap off. Fortunately, most manufacturers make replacements available! I’ve had good luck with KJW pistol magazines so far. Unfortunately, while most pistol magazines are standardized based on Tokyo Marui originals, most gas rifle manufacturers make their own proprietary magazines, so you’re stuck with theirs regardless of price or quality.

Airsoft shotguns are, quite frankly, a ton of fun. While there are a lot of shotguns out there, the most common variety of shotgun magazine is the Tokyo Marui type, which is about the same size and shape as a 12 gauge shell and holds 30 BBs. It’s essentially a small mid-capacity magazine in a compact form, and it’s capable of loading either gas or spring multi-shot shotguns for a three-round burst. They’re small and easy to lose, unfortunately, but they’re also fairly cheap! The other style of the shotgun magazine is the Marushin type, which is shaped more like a traditional rifle magazine and can carry as many as 40 rounds. This will last you quite some time as the Marushin shotgun mechanism is spring-powered, and only fires one shot at a time.

Regardless of whether you use an AEG, a shotgun, or a gas pistol, buying quality magazines and properly maintaining them can be the difference between success and failure at your next game. If you’re an AEG user, think about whether you’re happy with the advantages and disadvantages of high-capacity mags, or whether you’d rather use a mid-cap, an electric box magazine, or even a low-cap for added challenge and realism. If you’re using gas or spring powered guns, you probably won’t have as much choice over what mechanism your magazines use, but you can still be sure to buy from good manufacturers! Thank you for visiting iamairsoft.com! For great products and more information about the game, check out our Airsoft Buyers Guides and Airsoft U!